Things change in the blink of an eye these days.  Right now, COVID-19 is on the top of everyone’s mind (and rightfully so), but just a few months back everyone was talking about Baby Yoda, impeachment, Greta and OK Boomer.  Making a barrel-aged stout takes many moons, so when Melvin Brewing and Toppling Goliath first got together to make a beer in February of 2019, all the headlines were about a Russian autocrat and his love for meddling in elections, while being shirtless if possible.  The collaborative Russian Imperial Stout that followed was thus dubbed Vladimir Gluten, and after aging in bourbon barrels for over one year, then getting an addition of toasted cacao nibs and vanilla, it’s finally ready to dictate the masses.  But how did this colossal collaboration all come together?

“We’ve been big fans of Melvin for a long time,” says Clark Lewey, founder of Toppling Goliath Brewing in Decorah, Iowa.  “I met Jeremy (founder of Melvin Brewing) in San Diego at the Stone Brewing 22nd Anniversary party.  We hit it off well and started talking about big stouts, and after the event we ended up getting together and sharing our favorite stout recipe from our respective breweries.  Ideas started to roll, and as Jeremy cuts to the chase pretty quickly, he said, ‘let’s make the best stout in the world together!’  I knew I could hold up our end of the bargain since our Brewmaster Mike Saboe was already recognized as a stout whisperer.”

“I first had Toppling Goliath beer at a festival in Florida and it immediately stood out amongst the crowd,” says Jeremy Tofte, founder of Melvin Brewing in Alpine, Wyoming.  “The aromas, balance and crispness are apparent within seconds of sipping their beers.  They started out in markets I don’t frequent that often, so it was always a treat to have Toppling Goliath beer and I would order it on tap whenever I would see it.  They’re also from the middle of nowhere, like us, so that made me want to like them even more.  After we met in person and clicked, I invited them to our piece of nowhere to collaborate on a brew.”

“So, off to beloved Alpine, Wyoming we went,” says Lewey.  “The brew was exciting for us because the recipe was a true collaboration of ideas, including processes and ingredients neither brewery had worked with before.  We both agreed that twelve months was a minimum sentence for barrel incarceration of this liquid.  We weren’t present for the entire fermentation and transfer into barrels, however, Mike stayed in contact with the Melvin brewers about final gravity, volume and barrel selection.”

“I enjoyed talking with Brewmaster Mike a bunch,” says Tofte.  “He has so much knowledge stored away in his noggin.  He recommended a trick to make the mashing process easier and more efficient, and we now use that process on all of our big beers. After the base beer for Vlad was finished, we tasted it out of barrels periodically, and after all the brewers felt like it was in prime form, we transferred it to the bright tank and added some toasted cacao nibs and vanilla bean to accentuate the rich, roasty flavors already in the beer.  The additions complimented the malt flavors and helped to keep the alcohol heat at bay.  I had three the first day we canned them — they are almost sessionable (chuckles).” 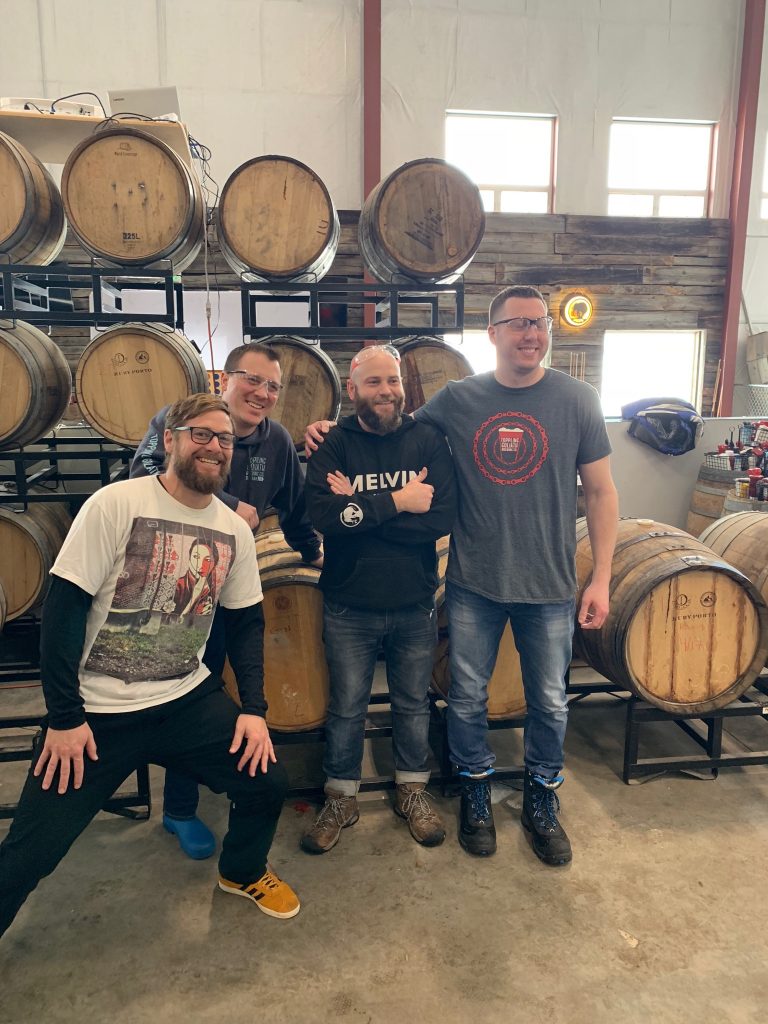 The collaboration not only produced a phenomenal barrel-aged stout, but it also led to Toppling Goliath distributing their beers around Teton County in Wyoming.  “When they came out to Alpine for the collab I introduced them to our distributor (a man named Nick) and they signed on with him,” says Tofte.  “They rolled out Toppling Goliath around Jackson a few months back and it made a big splash.  It makes me smile to see our beer shelves getting some diversity after looking eerily the same for twenty years.”

So a love of big stouts created a connection between the breweries, and the resulting collaboration solidified the bond for good.  Brewers from Melvin ended up going out to Iowa for a second collaboration at TG’s facility, a pale ale called Ladder Mash, and future collaborations are in the works.  But right now, Vladimir Gluten is finally being unleashed in single 16 ounce cans, a 12% ABV, barrel-aged imperial stout with cacao nibs and vanilla that’s a real Cold War-mer, darker than the Deep State but delightfully delicious.  Toppling Goliath was originally traveling to Wyoming in late March for some can release parties, but the Corona virus had other plans.  Not to be deterred, the two breweries decided to turn it into an online beer release with Craft Beer Kings, complete with a future online beer share and Q&A session with the Melvin and TG crews for the first 100 people who purchase the beer, while supplies last.  Details will follow shortly.

Who knows what the future headlines will hold, but we’ve got a new one for the present:  Melvin Brewing/Toppling Goliath Collaboration Vladimir Gluten Is Ready For You!  It’s aggressive and strong, but smooth enough to persuade you into several more years of reign.  Pick up some cans, tune in for the video beer share, and join the collusion…

Sign up for all Melvin Brewing stories and news by visiting this link: www.melvinbrewing.com/signup