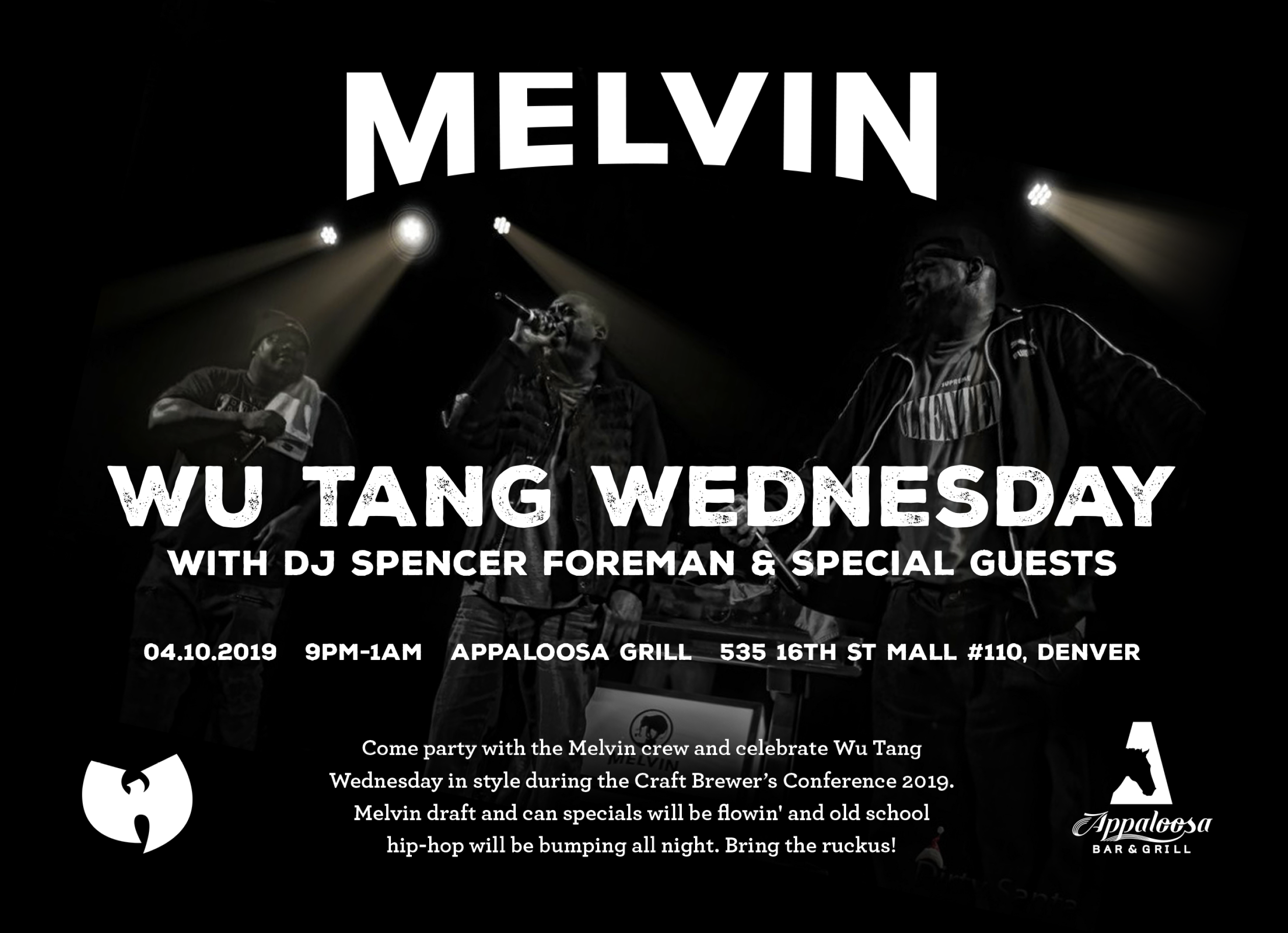 If you’re a true Melvin Brewing fan, or maybe even a die hard Wu Tang Clan fan, you’ve certainly noticed our fascination and love for the iconic ‘90s hip hop band. We’ve infused our brand with subtle hints of Wu Tang influences across the board, from our beer names, to can copy, to dedicated events celebrating their talents. We never shy away from the opportunity to turn the dial up for Wu Tang Clan in our brew pubs or at our parties, and as we approach Craft Brewers Conference in Denver early April, we have rightfully decided to host Wu Tang Wednesday at Appaloosa Grill. In the meantime, below is an interview with Travis Cook, International Field Hoperative. Have a read as he shares some Melvin Brewing + Wu Tang stories from the archives…

History of Melvin and Wu Tang 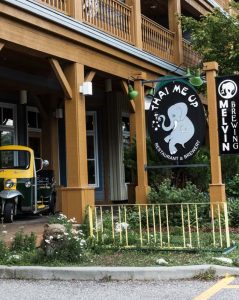 When Jeremy Tofte, Founder, bought Thai Me Up to Jackson in the early 2000s he wanted to create something unique to the town. Why be the same bar playing Sports Center on the TV and John Mayer on the speakers? Early ‘90s hip-hop and old school kung fu films brought the perfect vibe, and that has been our M.O. ever since. As a kid growing up in the early ‘90s, I was obsessed with Wu Tang, A Tribe Called Quest, Hieroglyphics and everything in between. Then as I got older, my tastes in music diversified quite a bit. But when I first met the Melvin crew in 2013 and started working with them in 2015 my love of golden era hip-hop was reignited.

Boulder Spring 2018 — What inspired the idea to host a Wu Tang concert?

I’m based in Colorado, and Z2 Entertainment that owns Fox Theatre and Boulder Theater took over an event space for a bit and started throwing shows there under the name “Pop Up.” The General Manager, Phil, was a big fan of Melvin Brewing and was pouring our beers. He approached me about doing a Melvin Brewing tap takeover with some local hip-hop DJs. I always shoot for the moon, so I said, “You guys are connected with Fox and Boulder Theater, and I know members of Wu Tang have played there before, so why don’t we try to get them?” He was kind of shocked by the ambition but said he would look into it. That led to a connection with a promoter named Kallista Alli and an agent named Pete Marrero. Sooner than later, we were throwing a show with Ghostface Killah, Gza, and Killah Priest!

What went into the planning of the event?

There were a ton of contract negotiations with the artists and the venue, and a lot of convincing of our CFO (Thanks Will!), but at the end of the day, the artists were super professional and gave the audience the show they wanted and more. The venue was accommodating and we sold it out, took over all their taps and kicked all the beer towards the end of the show. It couldn’t have gone off any better!

Which members performed at this show?

What were the best memories of the night? You made it onto the stage and rapped with Ghostface, didn’t you?

This was pretty much the highlight of my life up to this point. Somehow I have established myself as the resident rapper at Melvin (peep my Crack the RIIPA video!), and although it started as a joke, Jeremy likes to put me on the spot to showcase my rhyming skills. During Ghostface’s set, Jeremy and I were standing on the side of the stage, and Ghost called out to the crowd asking who remembered their first single “Protect Ya Neck.” Of course there was a huge roar, and then he said he wanted someone to come up and rap Method Man’s verse. Someone from the crowd was called up, but he was visibly intoxicated and they were like, nope, we need someone else. Tofte looked me in the eyes and said “Get up there!!” so I walked onto the stage and told Ghost I was ready. We had been hanging out a bit at sound check and back stage so he wasn’t shocked when I came up and he said “Word, I’m gonna finish my verse and then hand you the mic for Method’s verse.” At that moment I couldn’t believe what I had signed myself up for! I stood at the back of the stage nervous AF, going over the lines in my head, and then the time came, he handed me the mic, and I started spitting rhymes. Ghostface’s eyes lit up when I rapped the first line, like “Yo this kid ain’t playing!” and it gave me so much confidence. There was a brief moment where I started to lose the lyrics and he was looking me in my eyes mouthing the words to me and it lifted me up so that I finished strong. If you would’ve told my 14 year-old self that I would get on stage and rap with Ghostface on “Protect Ya Neck,” I would’ve thought there’s no way in hell. 24 years later it happened. Like I said, highlight of my life so far.

Part of the contract was that we provided dinner and they wanted to go to Cheesecake Factory. We definitely drew some looks walking in with our party of 10–12, including two hip-hop Hall of Famers. I hadn’t eaten there in a long time and the whole experience sitting across the table from them ordering apps and pastas was surreal. Killah Priest was a total joker. It’s funny because his voice and lyrics are very dark and apocalyptic, but he was the most comical of all of them. He was singing along to the oldies that they were playing on the restaurant speakers and everyone was laughing.

Tell us a little more about the behind-the-scenes experience…. 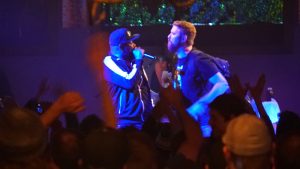 I made an impression right away with the Melvin Brewing Boomcase. It’s an old suitcase/boombox that we had custom made, and when I met their agent Pete at the hotel I walked in bumping “C.R.E.A.M.”  He told his security guy “Yo, that’s how you make an entrance!” We immediately hit it off. He told me that the guys would love the Boomcase and that I should greet them out front with it. The driver texted when they were ten minutes out and I went and hung out by the valet parking guy. I told him “Members of Wu Tang are about to pull up and I’m supposed to play some music for them.” I’m not sure he believed me at first but he was cool about it and I bumped some of Ghostface’s solo stuff as he and Killah Priest got out of the car. They had big smiles on their faces and Ghost told me he wanted one of those for himself! I really think this first impression was huge and they were totally chill the whole night. They could tell that we were fans and we were in this to have fun. I told their agent, “We’re not concert promoters. We’ve never done this before. We just want to make sure the artists are happy so let me know whatever you need.” There was a mutual respect and everything started coming together smoothly. After the show we closed down the hotel bar with them and counted out a lot of cash that they were owed, so that was pretty memorable as well.

We have a Honey Blonde Ale called Killer Bees… That’s a total Wu Tang reference. Were you nervous or excited to showcase that beer to Wu Tang?

We were a bit nervous showcasing Killer Bees, but they were completely cool about it. Gza likes IPA, so we had him covered there, but he didn’t drink much and Ghostface doesn’t drink. A lot of their entourage that was chilling backstage did start to crack into the Killer Bees cans though, and they were loving the beer and of course the name.

Ps. I had my moment of glory when I walked up to Ghostface, showed him the Killer Bees can, and asked him if he liked it. Judging by his smile and the rest of the conversation between the two of us, he approved.

In hindsight, it probably would’ve been a bigger show if we would’ve done it on an average Friday night in Denver, but we wanted to do something big for GABF and give industry friends the Wu Tang experience. We were having our third annual IPA Throwdown at Falling Rock on Wednesday night, and the Summit Music Hall is right across the street so it just matched up. Ghostface couldn’t do the show so we got Raekwon to headline along with Gza, Killah Priest and Young Dirty Bastard. There’s a lot going on that week and it was mid-week for normal 9 to 5ers, so we didn’t sell it out but there were about 700 people that had a great time!

What was it like working with Young Dirty and Raekwon?

Raekwon was a total professional and great performer, slaying all his classic Wu Tang verses and his solo stuff like “Only Built 4 Cuban Linx” which is probably my favorite solo album from members of Wu Tang. Young Dirty is starting to come up and is doing some shows with Wu Tang Clan, and he definitely brings the energy and crazy style of his late father. He did a lot of ODB’s classic tracks and performed some with Gza and Raekwon on Wu Tang tracks, which was pretty awesome to see. During both shows we threw, all of them could have just done their solo set and bounced, but they stuck around for the other sets and threw down old Wu Tang verses together which was incredible.

What were the best memories of the night?

Definitely lots of great memories drinking Melvin beers with tons of industry folks and waving our hands in the air to classic songs. Lots of Ws being thrown by all. My favorite musical moment of the night was during Raekwon’s set. He has a song on his newest album about the life of Marvin Gaye, and he gave a speech before the song dedicating it to Marvin. There was a legitimately deep feeling in the room as everyone paid respect to a legend, and then Raekwon laid down some beautiful verses. Special stuff.

What does Melvin’s future hold with Wu Tang?

We have always loved Wu Tang because they have such a unique attitude and approach to hip-hop, mixing grimey beats with lyrics that combine modern street scenes and mystical references to ancient cultures. They have obviously stood the test of time, and they are selling out huge arenas on the Wu Tang 25th Anniversary tour, so it’s pretty special to be able to throw concerts with them in small venues and pour our beer for the crowd. We hope to continue to work with them whenever possible, and they were all happy working with us and told us they would always work with us again depending on schedules. We have thrown around the idea of doing an officially branded beer with them but nothing has been set up yet.

Thanks Travis. You da man.