You know Kelly Halpin’s artwork, even if you don’t realize it– her deliciously evil genius created our dysfunctional family of Melvin characters, from the jacked and deadly Killer Bees to the racked and ready OG Melvin Man. Besides being a talented artist, Kelly is a professional mountain runner for La Sportiva and Osprey… casual. She does crazy shit like SPRINT UP THE GRAND TETON for fun. Actually, when we ask if she’s done it, she chuckles and says yeah, several times, and proceeds to school us about a real challenge, aka running up 11 mountain passes in one go. Her roots with Melvin run deep, and we think it’s high time you really got to know the woman who breathed life into our crazy cast of characters. We sit down with Halpin in the studio for a behind the scenes look at how she created so much radness, what’s next, and what makes her tick.

Have you always been an artist?

I spent my entire life drawing. I ended up in school for filmmaking, but I decided I liked to tell stories through illustrations more. I like drawing because it’s pretty simple. A piece of art can convey an emotion… it’s a way to get your mind on paper.

How do you get in the mood to create?

I have a feeling, emotion, or character in mind. I have a general idea what I want before I put pen to paper, but I never know exactly how it’s going to turn out. So I go into my flow state, listen to some good music. I usually try to complete something start to finish.

What brought you and Melvin together?

I used to goof off with Tofte late nights at the restaurant [Thai Me Up]. I hung out there a lot, and he was familiar with my artwork… we both have a weird sense of humor so we just started coming up with fun, wacky ideas. That’s how the Melvin characters were born… we started making them 7 years ago, when Tofte was still creating Melvin Brewing. So, I was working with him on these sketches way before any of the beer came out.

Which character did you dream up first?

Melvin himself, the guy with the body of a brewer and a hop for a head. Then I did Melvin, 2x4, Hubert, and Killer Bees. The original concept was that none of the characters would have faces, so they could be anyone and everyone all at once.

Do you pick favorites?

I really love Mayhem, the Killer Bees character… I like honey, so it was really fun creating this buff dude dripping with it. For drinking… I lovvvve 2x4. I’m not really that good at sessioning beer, which is why 2x4 is perfect, because it’s got so much kick.

What do you do when you’re not illustrating?

I go around and try to run in weird places… this year I’m going to South Africa to run a mountain traverse that connects 5 peaks. It’s 120 miles and there’s no women’s fastest time recorded on it. We are trying to run it unsupported and get a women’s fastest time. It will be a good adventure one way or another… it’s so fun to be out in the wild and know you don’t have any help out there, it makes it very real.

What’s your most memorable run so far?

One in Greenland was crazy, I definitely got myself into some trouble there. It snowed so much that I had to change my route and do some free soloing, and the rocks were falling underneath me, and I was out in Greenland alone…it was kinda scary. The most fun run I’ve done was the Wind River High Route, you go over 11 mountain passes and 11,000 feet, and we did that in 63 hours running with packs on. [Note: this route is in the Wind River Mountain Range, located in Halpin and Melvin’s Wyoming backyard.] We ended up at the trailhead for the eclipse.

Yup, while you were wearing nerd glasses, drinking a Hubert and watching the eclipse from your neighbor’s front lawn (Us. We did that.) Kelly Halpin was taking it in at the end of a 63 hour sufferfest that she literally calls fun. We are pretty lucky to have such a superhuman on Team Melvin: check out some early sketches of the Melvin lineup from Halpin’s secret stash.

The evolution of the Melvin man, who is designed to look like a brewer (hoodie, Carhartts, boots) and a fermentation tank all in one. 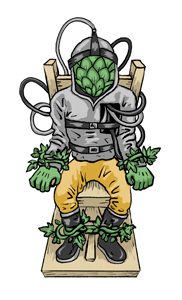 Hop Shocker, part of out RIIPA series, is a beefed up version on the original Melvin Man. To see his fully animated orgin story, click here.

The evolution of Mayhem, the Killer Bees character, aka Kelly’s fave. He was modified so he would stand out more on a beer can.

Previous StoryYour IPA is From the Future, For the Future
Next StoryWe Win Awards: Ch Ch Cherry Bomb Takes Home the Gold at World Beer Cup